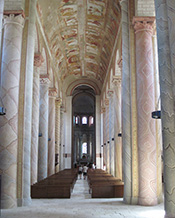 The gîte is located just a couple of miles from the small town of St Savin, which has been a UNESCO World Heritage Site since 1983 due to its impressive Abbey with its famous frescoes.

Although small, the town has a couple of good bakeries, a convenience store, pharmacies, supermarket and a number of cafés/bars, along with a very popular restaurant.

Every Friday there is a small market in the main square.

The mediæval town of Chauvigny is within easy reach. Every Saturday morning it has a very large market which sells almost everything.

From Easter until October, Chauvigny holds Les Géants du Ciel (the Giants of the Sky) a magnificent bird show featuring a wide range of different birds of prey.

For those who like a bit of exercise, there is the VéloRail a stretch of disused railtrack on which special "rail bikes" can be taken round the outskirts of Chauvigny and into the countryside for a total distance of 17Km. 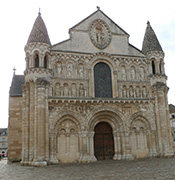 Poitiers (the capital of the Vienne) is approximately 45 minutes drive. It has an abundance of historical architecture (particularly from the Romanesque period), museums, shops, restaurants and cafés, as well as an indoor market.

The town has a number of parks and gardens dotted about the city and there are paths alongside the river through protected nature areas. 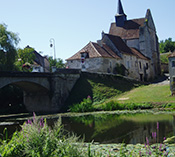 Although not a town, the village of Angles-sur-l'Anglin is not to be missed. It is classed as one of the most beautiful villages in France and it easily lives up to this accolade. The "lower" town offers gentle strolls along the banks of the river, whilst the "upper" town has magnificent views across the valley. In the middle are the ruins of the fortress which was built as a strategic defensive point and the Roc aux Sorciers prehistoric cave carvings.

Well-known for its embroidery, annual book fair and August fireworks display, this pretty village is definitely worth a visit.